Misuzulu ka Zwelithini will eventually be proclaimed the Zulu King on Saturday in South Africa following a year-long family dispute, according to custom.
Although the 48-year-old is the son of the former monarch, some royals contend that the late king’s will was really fabricated and that he was not the legal successor.
At Saturday’s customary coronation at KwaKhangelamankengane Palace, thousands of people are anticipated. The king-to-be will enter the revered cattle kraal to honor his ancestors before being formally recognized as the next Zulu ruler in front of both the living and the dead.
For the royal occasion, he will likely wear the lion’s skin he hunted, demonstrating his status as the chosen one. More than 10 cows have been slaughtered in preparation for the festivities. 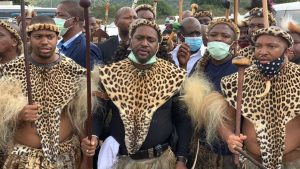 Next month, he is to be hosted by the government for a state ceremony.

The throne has no formal political power, but a fifth of South Africa’s population is Zulu and its monarchy remains hugely influential with a yearly taxpayer-funded budget of more than $4.9m (£3.5m).

The Zulu kingdom has a proud history. It is world-famous for defeating British troops during the 1879 battle of Isandlwana.

Its succession battles have always been fierce – and at times, bloody. The legendary King Shaka ka Senzangakhona killed his brother in 1816 in order to take the throne, then was himself assassinated in a plot masterminded by his nephew years later.

But this latest saga, following the death of King Goodwill Zwelithini ka Bhekuzulu more than a year ago, has been an embarrassing public spectacle.

READ ALSO  Following the booing episode at the ceremony, Akufo-Addo is mocked on social media as "them show showboy."

By the time he died last year, King Zwelithini had six wives and had ruled for more than half a century.