Former coach of Kumasi Asante Kotoko, Prosper Nartey Ogum, has described his rather sudden exit from the club as “regrettable”.

In an emotional letter to the club, which he posted to his social media pages, the University of Cape Coast lecturer said the opportunity to coach Kotoko was a “dream come true” but insists his “departure is for the best interest of the club”.

Ogum joined the Porcupine Warriors at the start of the 2021/22 season from WAFA and led them to the Ghana Premier League title, the club’s first in 8 years.

With no official communication from the coach or the club, reports claimed relationship between the 44-year-old and the club’s hierarchy had deteriorated to irreparable levels, while others cited disagreements over transfer targets.

Despite persuasion from some quarters to rescind his decision, Ogum pressed forward, officially ending his 11-month association with the club on 15th August, 2022. 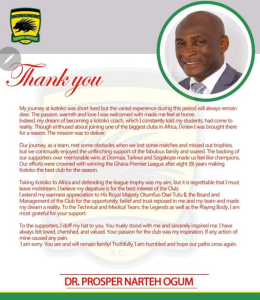 Continue Reading
READ ALSO  Although Brazil is the best team in the world, we will compete with them. Andre Ayew
Asante kotokoGhana premiere leagueKotoko coachProsper Nartey
0
Share FacebookTwitterGoogle+ReddItWhatsAppPinterestEmail

BoG to shut down licensed forex bureaus that contravene the foreign exchange laws.