Never in the wildest dreams of Richard Ofei did he think of meeting former president John Agyekum Kufuor whiles he was in the seat as the country’s president. 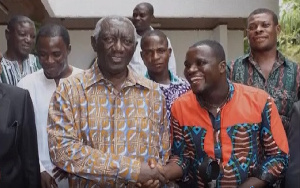 All Richard Ofei had thought as a young boy growing up was to become footballer and nothing short of that.

However, Richard Ofei was not able to fulfil his dream of becoming a professional footballer due to an unfortunate accident with a COCOBOD tanker that got one of his legs amputated.

The former Liberty Professionals players who played with the likes of Michael Essien and Derek Boateng was faced with the harsh realities of life to decide his next career path.

Young Richard Ofei who was about 18 years old when the accident occurred, decided to enrol in a vocational and technical school for the disabled at Kaneshie in Accra to learn a trade.

During one of their vacations, Richard Ofei returned home and was going about his normal activities till one night he had a very interesting dream of meeting President Kufuor.

When Ofei woke the next day, he couldn’t keep mute about the dream and decided to open it up to his sister and just like the dream of ‘Joseph in the scriptures’, Ofei’s dreams became a reality the next day.

Speaking in an interview with Natalie Forth on GhOne, this was how the former Liberty Professionals player narrated his story.

“During the vacations, I dreamt that I met ex-president Kufuor. My sister went to the market and got a call that I should come to school the next day because president Kufuor is coming to the school.
“So my sister came back and confronted me that I knew Kufuor would come to my school and said it was a dream,” he narrated.

He added, “I feel it was something that God had intended to happen because when president Kufuor came, he said I Richard Ofei had requested something from the Netherlands president but I have never asked or met him before. He donated food items, wheelchair, clutches and other items in an articulator.”

According to him, meeting ex-president Kufuor was his door to opportunities in his life.

He noted that ex-president Kufuor was able to get him a job at COCOBOD where he met several personalities who shaped his life.

“I used the opportunity to tell the president that it was a COCOBOD car that made me disabled and he spoke to some of his appointees and I later got a job at COCOBOD as a lift operator from 2003 to 2016,” he said.

According to him, “because I was always in the lift, I met everybody that came there. I remember the former French Ambassador gave me $10,000 cash in a lift.”