Almost two years after then President John Dramani Mahama said the New Patriotic Party (NPP) flagbearer, Nana Addo Dankwa Akufo-Addo must have been sleeping during his tour in the Western Region to have missed the good work done by the National Democratic Congress (NDC) government on the Eastern Corridor Road, a response has been served.

Akufo-Addo was reported to have bemoaned the state of roads during his five-day tour of the region, criticizing the government for failing to honour its promise to fix the roads.

Reacting to the statement, Mahama said Akufo Addo might have fallen asleep while touring the region, hence did not notice the various projects the NDC had embarked on there.

“During my campaign in 2012, I realized that most of the roads here are very bad. I made the promise to invest heavily in roads here if I am elected President. I have kept my promise. Under the cocoa roads programme, most of the projects are in the Western Region. The majority of roads in this region, are many, I cannot name them. I heard someone came here and said he had not seen these roads. I am sure he was sleeping at the time,” said Mahama. 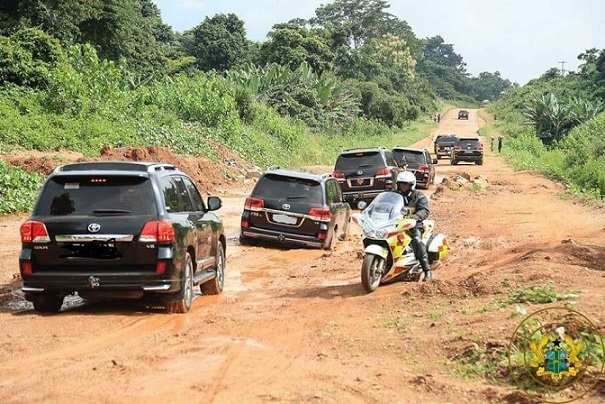 While addressing the chiefs and people of Hohoe on day two of his Volta Regional tour, President Akufo-Addo assured that his administration will fix the Eastern Corridor roads, stressing that the erstwhile John Mahama administration failed to execute that task.

In a direct response to Mahama, Akufo-Addo stated that his journey to the Volta Region was a bumpy one owing to the terrible nature of the roads; hence, he could not sleep.

The development of Ghana’s Eastern frontiers was one of the priority projects of the previous National Democratic Congress (NDC) government to open up the area, which is a food hub.

The Eastern Corridor Roads project, designated as N2 of the National Road Network, is a South to North Road, which starts from the Tema Motorway and ends at Kulungugu on the country’s border with Burkina Faso.

It is 965 kilometres long and traverses the Greater Accra, Eastern, Volta, Northern and Upper East Regions.

Although the previous government began work on the road, it is yet to be completed.

General news how can I sleep? - Akufo-Addo jabs Mahama Your 'supposedly fixed' roads are bumpy