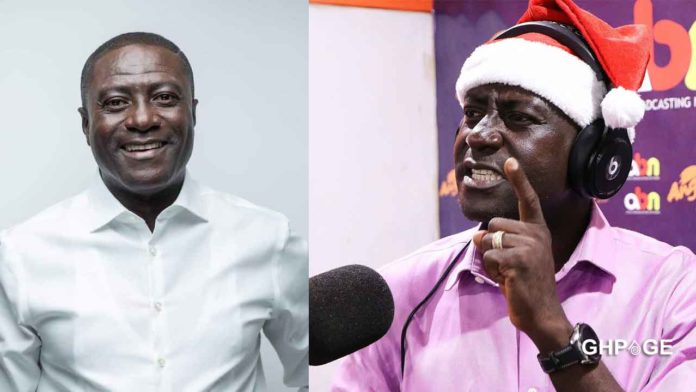 Captain Smart in an interview with Paul Adom Otchere on the Good Evening Ghana show on Thursday, May 6, 2021, explained what led to his suspension.

The Morning Show host revealed that Samuel Kofi Acheampong(Bronzy) originally gave him a call telling him about the series of pressures that have come on him and the company’s president, Dr Kwaku Oteng.

Captain Smart further disclosed that Bronzy asked him to ASAP call Dr Oteng and explain things to him but should not mention his (Bronzy) name as one who told him to call him.

He revealed that Dr Kwaku Oteng said in a phone convo that he (Oteng) had been told that he (Captain) had insulted President Akufo-Addo, vice, Dr Mahamudu Bawumia, Alan Kyeremateng and others.

Smart said he told Dr Oteng that the information was false and even confessed his intention to apologise on-air and resign if they provide him with evidence that he insulted these high ranking people as being alleged.

“I told him that I can say all sorts of things in this world but to go to that extent to say that the President of the land, the Vice, the IGP and Alan Kyerematen are fools, no! if you can provide me with the evidence, I will apologize to the world and resign from your company”.

Despite his explanations to the accusations on him, he was asked to take time off-air thus he was suspended.

The broadcaster told Paul Adom Otchere that Kwaku Oteng unveiled to him that some top people from GRA and some high ranking government officials are pressurising him to take action because he(Captain) is too loud.

“I called Dr Kwaku Oteng and he said some people within Akufo-Addo’s government are calling him and have been writing him letters from Ghana Revenue Authority (GRA) just because they say I talk too much”.

The outspoken radio presenter in his blow-by-blow account said Dr Oteng asked him to take a break from the radio for some time till things come down because he can’t withstand the pressures coming on him.

“In the course of our conversation, he told me that because of the pressure, when I close from work today [Thursday, May 6] he would want me to go off air for some time and when the pressure from above comes down, then I can resume”

“I said ok if that was going to help you because I am just one individual and you have all these companies, if Captain Smart alone will bring your company down, why not, I will do that [step aside] for you.” Captain said.

Captain Smart had earlier registered that he was not afraid to lose his job and would have gladly left if he had been told to resign.

“If he had called to tell me, Captain, I cannot work with you again. I would have had no problem because I will not go hungry. My brain works,” he said.

It was reported yesterday 6th May 2020 that Captain Smart has been suspended by his employer over his constant criticism on national affairs which goes a mile to defaming the government.

IMANI Ghana’s Franklin Cudjoe first revealed this piece of information on social media following a convo he had with the suspended Radio Presenter earlier in the morning.

According to Mr Frankling, Captain Smart’s boss (Dr Kwaku Oteng, CEO of ABN) asked him to go off-air due to excessive pressure mounted on him by some high ranking officials in government.

Confirming this, the General Manager of Angel FM Mr Kwadwo Dickson revealed that Captain Smart has indeed been suspended (date for his resumption unknown) by the CEO and Management of ABN.

Watch the video below;

Next post VIDEO: ‘I used to sleep with four women a day’ – Morris Babyface

Mother of Edith Arthur popularly known as Kwansema who was a contestant for TV3 Ghana’s Most Beautiful (GMB) 2021 has...

The Bono East Regional Police Commander has been forced by circumstances and pressure to order a refund of a GH¢200...

The Western Regional Minister, Mr Kwabena Okyere Darko-Mensah, has said that the missing but found woman who was reported to...

The presidency on Tuesday (September 21) confirmed the recent use of Ghana’s presidential jet by the Liberian president, George Weah,...