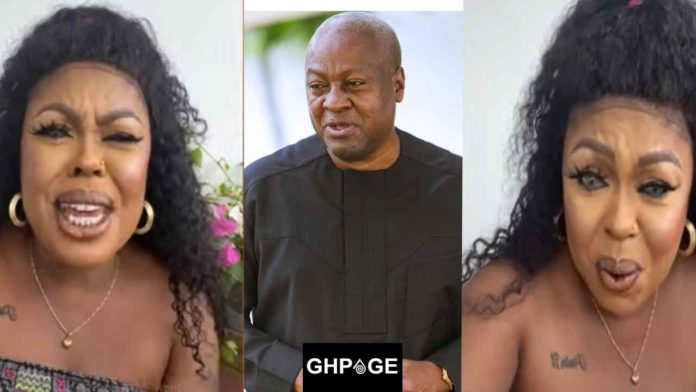 Afia Schwarzenneger has reacted to the viral audio where she was accused of plotting to destroy the former president of Ghana, John Dramani Mahama.

The self-acclaimed queen of comedy stated that she had her reasons for not supporting John Mahama as she is not ashamed of it.

Afia Schwar also admitted lobbying for her children to become Free SHS Ambassadors, adding that there is nothing wrong in looking for good opportunities for her children.

She further dared the ghost Snapchat user to release the full audio she has about her as she is not frightened to speak out.

“I didn’t support John Mahama during the elections because of certain people. It’s not a secret that I fought him and I am free to support anyone I want. Is it wrong for me to lobby for my children to become Free SHS Ambassadors?

I am not afraid of anyone so I am daring that person to release the full conversation. I am daring you to release everything you have about me. Whoever is behind that account is just a fool. You have been dared, do your worse”, she stated.

Watch the video below;

It can be recalled that a ghost Snapchat user, Bombshell exposed Afia Schwarzenegger in an audio planning to sabotage John Mahama during the 2020 elections.

In an audio the anonymous Snapchat user released, Afia Schwar was heard vowing to deal with John Mahama’s second wife and not Martin Amidu.

0
InVIDEO : Afia Schwarzenegger reacts to leaked audio of her plotting against John Mahama

Previous post WATCH VIDEO : I will dump you if you can’t lick me for 30mins – Akiyana tells men

A middle-aged woman, Janet Korley, who travelled to seek greener pastures in Lebanon sometime in the mid-'90s has disclosed how...

Ghanaians especially some of the youth are mindless about how they will survive, in fact, they will do just anything...

A lot of times, we hear stories of couples getting stuck inside each other during sexual intercourse. While some people...

A video clip showing two young women ostentatious parading themselves on camera as lesbians has hit the internet space. In...

• Ibrahim Mahama once sold his work for a million dollars • He has been named the 73rd Most Influential...

• Moesha has revealed that some girls die after sleeping with men for money • She adds that their glory...