Christiansborg Castle was built by Danish colonialists in 1659 on a land obtained from Paramount Chief Okaikoi of the Ga ethnic group.

Over the years, the fort was juggled between the Portuguese, Swedish and Danish. Sometimes it was taken over by force; other times it was bought.

In 1693, Asamani, an Akwamu Chief, planned to seize control of the castle by way of a cunning trick.

A successful trader and warrior, Asameni moved to Accra, became proficient in the Danish language and disguised himself as a cook and interpreter to secure work at the castle.

He studied the site, and its occupants and operations, including the ships’ arrivals and departures as well as those of traders, merchants and others who worked and visited the Christiansborg castle.

The Akwamu was a state set up by Akan people (in present-day Ghana) that flourished in the 17th and 18th centuries.

Asamani informed the Danes that he would escort a group of Akwamu traders to purchase ammunition.

In 1693, Asamani and 80 armed men impersonating traders entered the castle.

Since it was accepted practice to test merchandise prior to purchase, the men were given ammunition.

But they had also hidden ammunition, powder and shots under their clothes.

Once in the castle, the Akwamu attacked the unsuspecting Danes.

Many Danish merchants and officials were injured, and some were taken to Akwamu as captives.

Asamani and his men captured the castle.

The Akwamu leader, Asameni occupied the Christiansborg castle for a year appointing himself “Governor” of Christiansborg Castle, trading with merchants from many nations.

He replaced the Danish with the Akwamu flag. 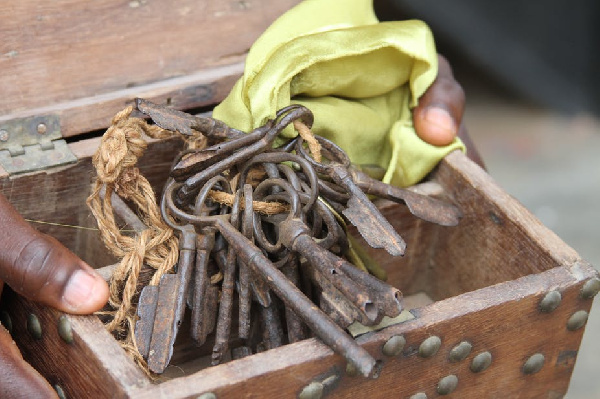 The Keys are still in the ethnic group’s possession till this day and it had since been kept by the Akwamu as a trophy and a proud symbol of the resistance by the Akwamus from the Danes.

In 1957, when Ghana became independent, with Queen Elizabeth II as head of state, the fort became Government House, the residence of the Governor-General.

When Ghana became a republic in 1960, it became the residence of Ghana’s first president, Kwame Nkrumah.

Christiansborg Castle is currently marked a security zone and is not open to walk-in visitors.

0
InHow a Ghanaian Chief tricked the Danes in 1693, took their castle and later sold it back to them

• Members of a pro-LGBTQ+ group are being threatened for their position on the issue • The 18-member bloc asked Parliament in...

• President Akufo-Addo did not use the presidential jet on his latest trip • He flew to Serbia over the...

Nigerian afrobeats songstress Tiwa Savage was short of words when she received a message from an anonymous containing her sextape...

•Rockson Dafeamekpor says Akoto Ampaw and his cohort launched a full attack on the anti-LGTBQ bill •He has questioned why...

The Bank of Ghana (BoG) has announced it would soon stop producing and circulating the GHC1 and GHC2 notes to...