When Cristiano Ronaldo leads Portugal out to face Hungary for their opening Euro 2020 fixture on 15 June, he will do so – as is so often the case – with records ready to be rewritten.

The 36-year-old, who helped his country to the title in 2016, has a strong case to be considered the greatest Euros player of all time.

Ronaldo has played more games than anybody else in the tournament’s history, has scored more goals in qualifiers than anyone else and, if he scores once this time out, he will be out on his own as the leading scorer in European Championship finals.

So how does he compare to the Euros greats – and what other new records could he set? 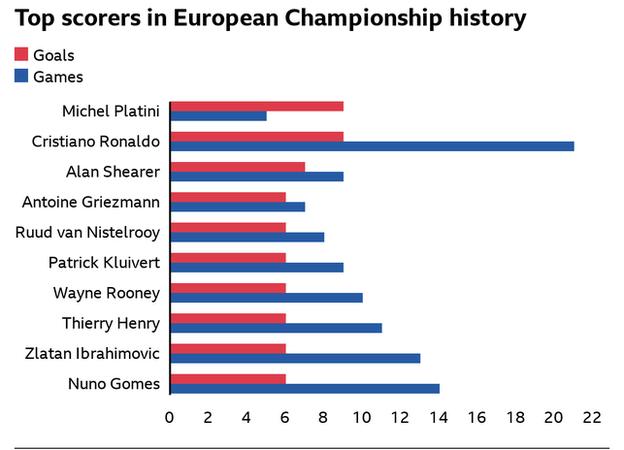 Ronaldo is the joint top scorer in European Championship history with nine goals – in 21 games across four different tournaments. He is the only player to score at four Euros.

He shares that record with Michel Platini, who scored nine times for France in five games at Euro 1984, but never played at another. That was the only European Championship Les Bleus played at between 1960 and 1992.

All his nine goals have come from inside the box – and five have been headers, both records.

Six of Ronaldo’s goals have been in group stages, with one in the Euro 2012 quarter-final against the Czech Republic and two in semi-finals – against the Netherlands in 2004 and Wales in 2016.

France’s Antoine Griezmann could surpass Platini and Ronaldo if he has a good tournament. He is three behind on six goals, all scored in Euro 2016 as he won the Golden Boot.

Ronaldo is also the top European Championship qualifying goalscorer – with 31 on top of his nine finals goals. That is a relatively new record, passing Robbie Keane’s mark of 23 in September 2019.

Ronaldo finally won a major international tournament – something that has eluded his old rival Lionel Messi – when Portugal beat hosts France in the Euro 2016 final.

He went off injured in the 25th minute but bellowed instructions from the sideline throughout the game as they won 1-0 in extra time.

He is one of 44 players to feature in two European Championship finals – in 2004 and 2016. Nobody has ever played in three. Only Ronaldo and Bastian Schweinsteiger have played in three semi-finals.

If he was to win another, that would take him joint top with West Germany’s Rainer Bonhof (1972 and 1980) and 12 members of Spain’s Euro 2008 and 2012 teams – the only players to win two European Championships.

Ronaldo has the joint-highest number of wins in Euros games with 11 – level with Spain’s Cesc Fabregas and Andres Iniesta – so will take the lead this year if Portugal win at least one game. 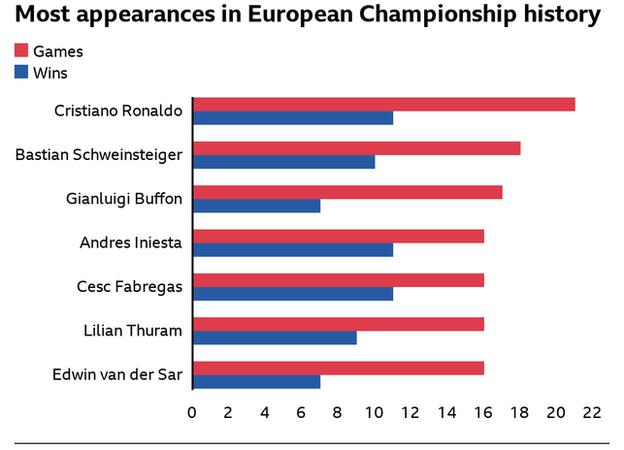 Ronaldo is one of a large group of people to have played at four European Championships. This summer, he will become the only person to play at five.

He has played in 21 games at the finals, three more than Germany’s Schweinsteiger and four more than Italy legend Gianluigi Buffon. Ronaldo also leads the way in minutes played (1,795).

Where else does Ronaldo lead the way? 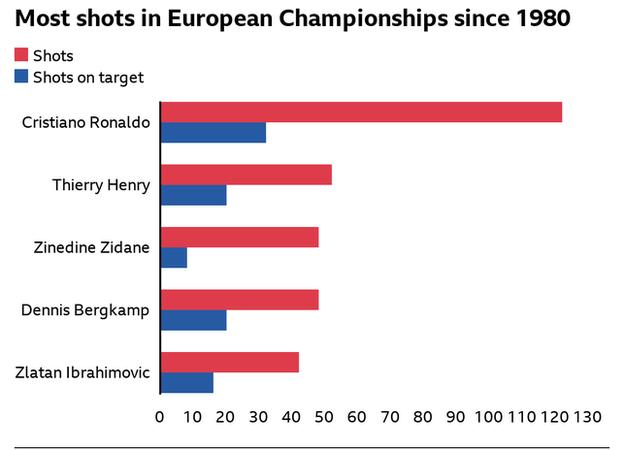 No-one who has seen Ronaldo play will be surprised to hear he leads the way in shots attempted. He has had 122 efforts at goal in the Euros. In all tournaments since 1980 – when such records were first kept – France’s Thierry Henry is next on the list… with 52.

The distance between the two in shots on target is closer – Ronaldo, again, is top with 32 – while Henry and Dennis Bergkamp both had 20. Gareth Bale is next on 17, from only 26 attempts – all at Euro 2016.

Ronaldo has hit the woodwork six times, twice as often as anyone else since 1980.

He is joint second for assists in that timeframe, with five – putting him level with five other players, including England’s David Beckham. Karel Poborsky, of the Czech Republic, tops the charts with six assists, so this is another record Ronaldo can take this time out.

Ronaldo has attempted 83 dribbles – which, in all tournaments since 1980, puts him second, behind Luis Figo. But the Portugal captain only completed 31, which puts him seventh on the list.

What else is there left to achieve?

In addition to becoming the tournament’s all-time top scorer and the first player to appear at five finals, Ronaldo could beat several other records at Euro 2020.

We have already mentioned that he could join the list of players to win two Euro titles, and be the first player to appear in the final three times.

He could also be the first person to play in four semi-finals.

If he has a really outstanding tournament, then one record that must surely motivate him could be within his grasp. His 103 goals for Portugal means he is only six behind the record for goals scored in men’s international football – the 109 registered by Iran’s Ali Daei.

Portugal 2-1 Netherlands, Euro 2004 semi-final – Ronaldo headed Portugal into the lead and then set up Maniche for the second

Portugal 3-3 Hungary, Euro 2016 group stage – Ronaldo scored twice – with a headed equaliser – as Portugal came from behind to avoid being knocked out

Portugal 2-0 Wales, Euro 2016 semi-finals – Another Ronaldo header put them on the way against Wales and then his shot was deflected into the net by Nani to seal the win

Portugal 1-0 France, Euro 2016 final – Even though he was injured midway through the first half, Ronaldo played a big role on the sideline, shouting instructions to the team as they beat France to win the European Championship

And a few of his lowest Euros ebbs…

Greece 1-0 Portugal, Euro 2004 final – Portugal lost the final of their home tournament to underdogs Greece, with Ronaldo missing a great chance to level, shooting over when through on goal

Portugal 2-3 Germany, Euro 2008 quarter-final – Miroslav Klose ghosted away from Ronaldo to give Germany a 2-0 lead as Portugal went out in the last eight

Portugal 0-0 Spain (2-4 pens), Euro 2012 semi-final – Ronaldo waited to take the fifth penalty in the shootout… but it never got that far as Portugal lost to their neighbours

0
InCristiano Ronaldo: Is Portugal legend the best Euros player ever?

The Porcupine Warriors will play their first pre-season friendly game in Dubai against Al Hilal United in Sharjah on Thursday...

The Black Stars of Ghana convincingly beat Zimbabwe by 3-1 in a FIFA World Cup qualifier on Saturday, October 9....

Former Asante Kotoko defender Godfred Yeboah who died some months ago will be interred today Saturday, September 18, 2021. The...

#10 Haller, Onana, Kudus, Labyad, Mazraoui Ajax aren’t short of African interest, although they’re unlikely to be there among the...

Four notable European coaches have slapped in their CVs to be considered for the vacant national team post of Ghana...