Lose your game and get GH¢5,000 each – Elmina Sharks make revelation about German betting syndicate

‘They can go to hell’ – NDC MP slams pro-LGBTQ+ diplomats

How Kennedy Agyapong predicted doom for Assin North MP in 2020

PHOTOS : Check out these 7 best dressed Ghanaian celebs on the gram this week

Everyone loves a bargain and, with the next transfer window likely to see a repeat of last month’s low spending across Europe, this summer could again see many clubs similarly reluctant to pay big fees for players.

So it might be the perfect time for a freebie. That doesn’t necessarily mean some unwanted 40-year-old journeyman though – especially not this summer.

As football’s best players return to European action, many are already on the hunt for a new club with their contracts up in July.

BBC Sport takes a look at the stellar names that can currently be picked up for free this summer.

Transfer fees aren’t the whole story of course – wage demands can be astronomical – but the opportunity to sign some of these talents for free is nothing to be sniffed at. 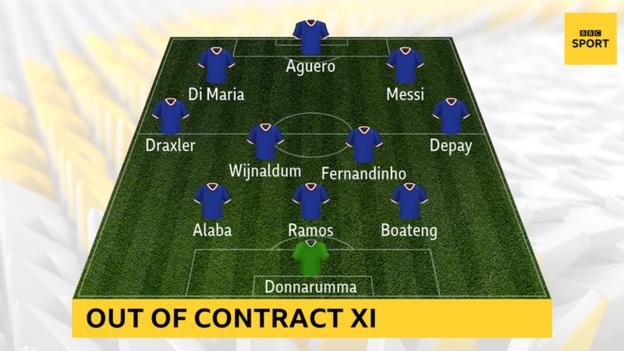 AC Milan are flying high in Serie A this season but there are question marks over undisputed Italy number one Donnarumma, who has played more than 200 games since his debut at the age of 16.

Now 21, he is one of the most highly rated goalkeepers in the world and would normally command a fee over £50m, but contract talks with the clubs are currently “frozen”.

Germany World Cup winner Boateng has been a regular in the Bayern team this season, with the side topping the Bundesliga table once again.

The 32-year-old former Manchester City defender is open to a contract extension but the club are yet to begin talks with the player.

Real Madrid skipper Ramos will go down as one of the game’s greatest defenders, playing nearly 700 games for the La Liga giants and scoring an astonishing 100 goals.

The centre-back turns 35 in March and Real have offered him a one-year contract extension, but one that reportedly reduces his salary from £10.5m to £8.8m.

Austria international Alaba is the second key defender who could be departing Bayern this summer after failing to agree a new deal.

The 28-year-old, who can also play in midfield, has been heavily linked with a free transfer to Real Madrid where he will reportedly earn £204,000 a week after tax.

The 35-year-old Brazilian has clocked up more than 300 games for City, and honours including three league titles and the FA Cup, but now Pep Guardiola may want to bring in fresh legs to replace the veteran midfielder.

The player himself is undecided over his future and reportedly has offers from South America.

Netherlands international Wijnaldum has still not signed a new deal with Liverpool and looks increasingly likely to be the first of the Reds players who won the Champions League and Premier League to leave.

The 30-year-old seems intent on fulfilling a boyhood dream of playing for Barcelona, where compatriot Ronald Koeman is the manager.

Manchester United flop Depay rebuilt his career in France with Lyon but is yet to sign a new contract with the club.

The 26-year-old Dutch international has been heavily linked with a move to Barcelona, while Bundesliga side Borussia Dortmund are also said to be interested.

Germany international midfielder Draxler has been in and out of the PSG team this season.

The 27-year-old says he intends to see out his contract at the Ligue 1 champions and will announce his next club in March.

Another PSG man and the first of a tasty Argentina trio who are all out of contract this summer.

Winger Di Maria had an ill-fated spell at Manchester United but has had a fruitful time in Paris, winning four league titles and reaching the Champions League final, and the 32-year-old is “staying calm” about his future.

The greatest player of all time available for nothing? Messi can talk to non-Spanish clubs right now and handed in a transfer request last summer before being persuaded to stay.

But a cash-rich team would need to pick up the 33-year-old’s hefty pay packet.

A leaked report recently said his four-year contract at Barcelona including wages and other variables amounted to an eyewatering £491m.

City’s all-time leading goalscorer Aguero has missed a large chunk of the season through injury and, at the age of 32, can Pep Guardiola rely on him to stay fit?

Reports say he may have to halve his current £260,000-a-week deal at Etihad Stadium if he is to stay there.