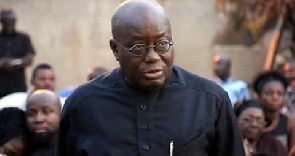 President Addo Dankwaa Akufo-Addo and other dignitaries will Friday morning file past the remains of former Vice-President Kwesi Bekoe Amissah-Arthur ahead of final funeral service at the Accra International Conference Center.

The President will be joined by his vice, Dr Mahamudu Bawumia, members of the Council of State and top security chiefs, to pay their last respects to the late former Vice President as he journeys to eternal rest.

Burial service at 9 a.m. begins immediately after the filing past ceremony by the President and other dignitaries.

The main funeral service will be held at the Conference Centre and will be beamed live on screens at the forecourt of the State House.

The State House is expected to accommodate the expected spillover of mourners at the main service at the Conference Centre.

A brief reception will be held though at the forecourt of the state house.

Paa Kwesi Bekoe Amissah-Arthur, 67, passed away at the 37 Military Hospital on June 29, 2018, after he reportedly collapsed at the Air Force gym where he went to exercise.

The state burial ceremony for the late former Vice President began on Thursday with hundreds of Ghanaians, including former government officials, the rank and file of the National Democratic Congress (NDC) that he belonged to trooped to the Conference Center to pay their respects.

Rev Osabutey was recounting memories shared with the former statesman at the forecourt of Accra International Conference Centre where the mortal remains of the technocrat-turned-politician have been laid in state.

Meanwhile, final funeral rites and reception will be held at the forecourt of State House from 1400 on Saturday, July 28.

The interment for Mr. Amissah-Arthur will, however, be by special invitation.

A thanksgiving service is expected to be held on Sunday, July 29 at the Calvary Methodist Church in Accra.