The star sold more than 600,000 copies of her so-called “divorce album”, with 80% of those sales on CD and vinyl, bucking the trend towards streaming.

However. the total falls far below the 800,000 copies her previous album, 25, sold in its first week.

The discrepancy illustrates how the music industry has become dominated by singles, thanks to streaming, which now accounts for 83% of consumption.

In June, the country saw its first week in which audio streams topped the 3 billion mark – a feat that was repeated three times in December, record labels association the BPI said. 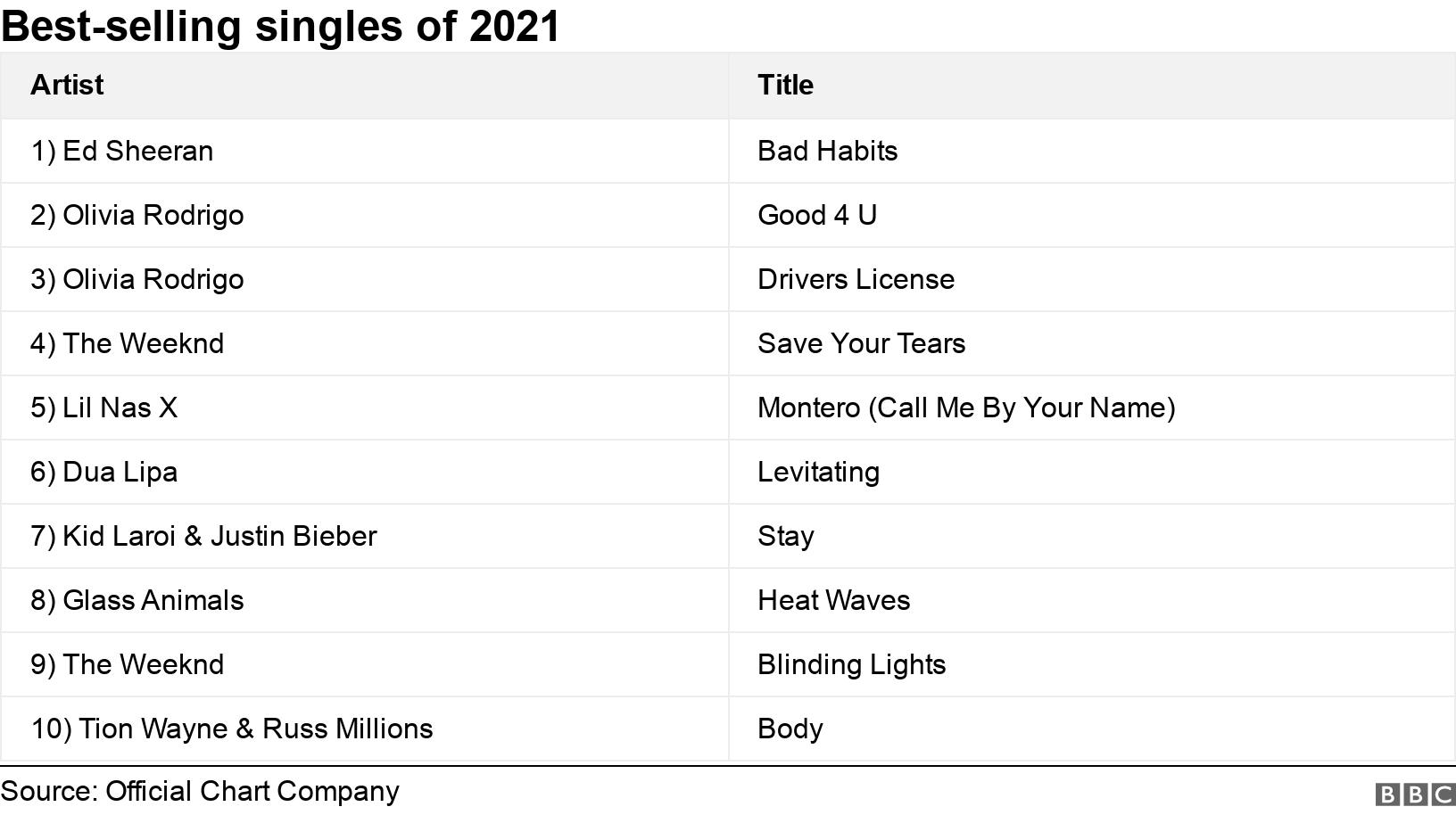 Ed Sheeran had 2021’s biggest-selling single, Bad Habits. US pop sensation Olivia Rodrigo had the second and third-biggest songs, with Good 4 U and Drivers License.

All of the top five were by solo acts, without featured artists, for the first time since 2009.

Eight of the top 10 albums were from British musicians. Ed Sheeran took second place with = (Equals); and Abba came third with their comeback record Voyage – which was the year’s biggest-seller on vinyl.

Perennial best-sellers by Queen, Fleetwood Mac and Elton John held on to their positions in the top 10, thanks to buoyant streaming numbers. 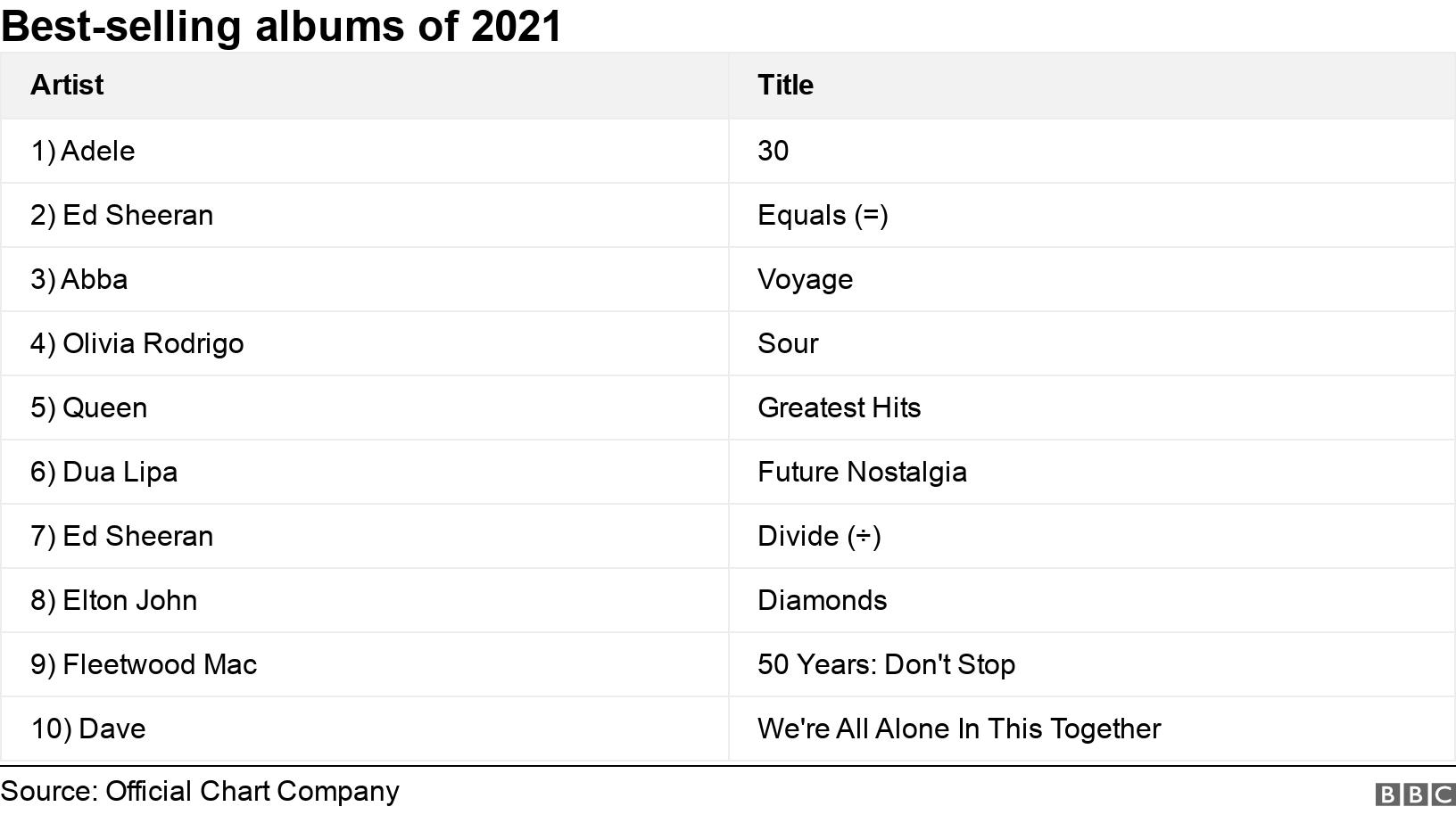 The overall recorded music market – including physical sales and digital income – was up 2.5% last year. CD sales fell to a 33-year low, with 14 million discs sold. Album downloads also fell, to 4.6 million; while vinyl sales were up 8% to 5.3 million.

But while record labels will be delighted with the growth, especially in streaming, there is disquiet amongst artists about how the profits are divided up. 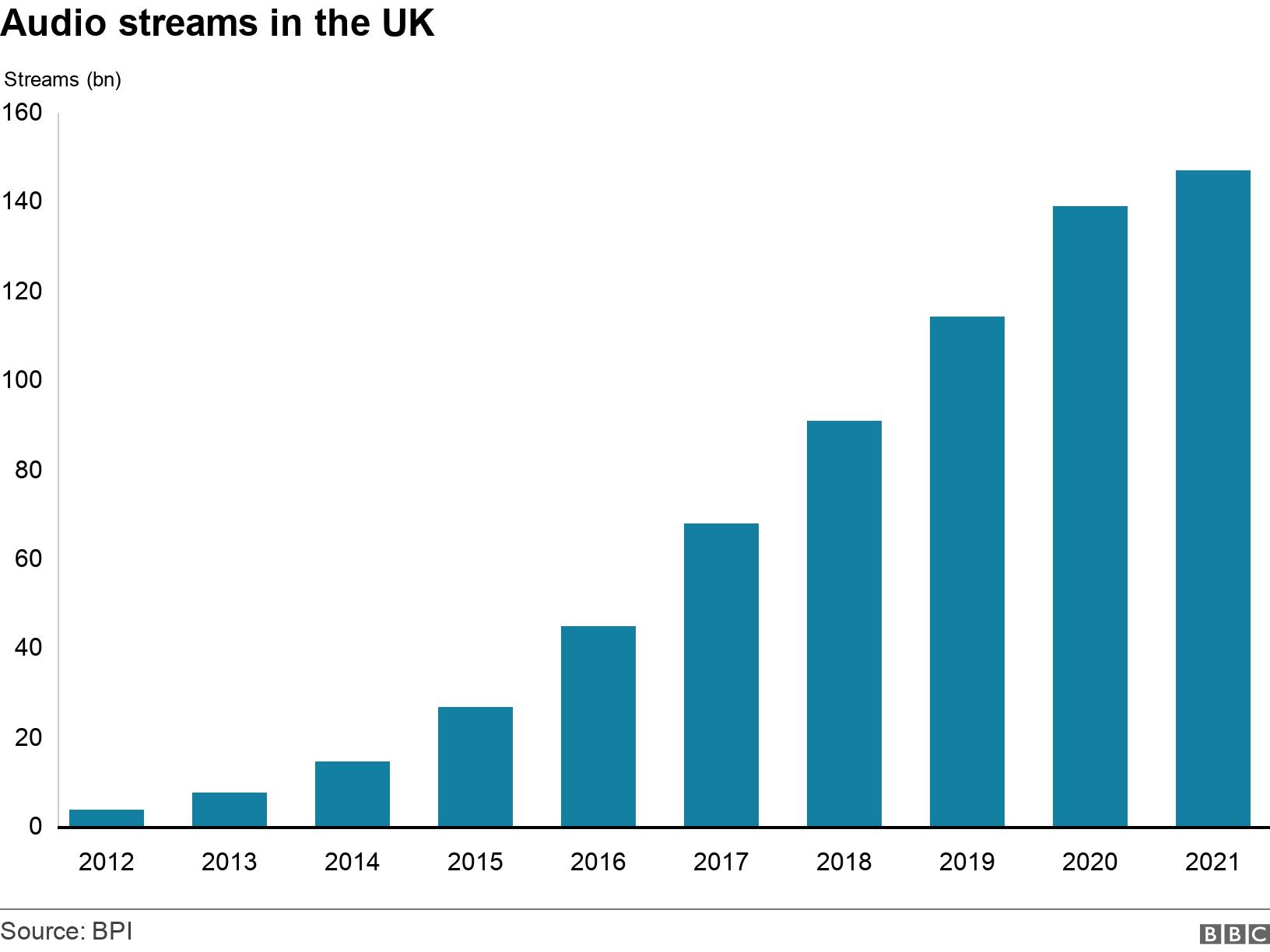 The #BrokenRecord campaign, which was formed to highlight problems with the way streaming revenues are distributed, resulted in a major parliamentary inquiry last year.

MPs called for a “complete reset” of the market, with musicians given a “fair share” of the £736.5 million that UK record labels earn from streaming; and the UK’s top streaming services will be investigated by the Competition and Markets Authority this year.

At the top of the leaderboard, 180 different artists had over 100 million streams last year – the equivalent of selling 100,000 CDs.

‘Wolf from the door’

“The rise of streaming has empowered more artists than ever – from all backgrounds and eras – to build new fanbases around the world and to forge successful careers in music,” said the BPI’s chief executive, Geoff Taylor.

The BPI has also warned that government intervention into the market could “negatively impact performers, jeopardising the [music industry’s] hard-won return to growth after years of decline”.

However, smaller acts like Nadine Shah told parliament that streaming revenues are not enough to “keep the wolf from the door”, especially after the pandemic wiped out their touring income.

On Sunday, German techno artist Skee Mask pulled all of his music from Spotify in protest at how little “creators behind the music receive in terms of value, respect or space” – as well as Spotify founder Daniel Ek’s recent £83 million investment in military defence company Helsing.

Meanwhile, British electronic musician Kieran Hebden, who records under the name Four Tet, is taking legal action against record label Domino over the royalties he is paid on digital services.

Hebden argues that, under the terms of his 2001 record deal with Domino, he should be getting a 50% of the money generated when his records are streamed, instead of the 18% the label currently offers.

Domino, which argues his reading of the 20-year-old contract is incorrect, recently pulled all three of the Four Tet albums it owns from streaming services, prompting a wave of outrage from fans.

Hebden’s case may never be heard – the musician says he cannot afford to pursue it if it is escalated to the High Court – but it is certain to focus musicians’ attention on the historical deals they have signed.

Meanwhile, the BPI argues that labels are still vital to help artists achieve their dreams.

“The hundreds of millions of pounds labels invest in the UK each year is supporting the emergence of a new wave of musicians connecting with millions of fans all over the world,” said Geoff Taylor.

“This year’s growth shows there is a huge appetite for music and we believe that by working together we can increase the value of the whole music market, so that streaming can support even more artists in the future.

Wed Jan 5 , 2022
Ghana’s opponent at the upcoming African Cup of Nations, Morocco arrived in Cameroon by making a big statement about their preparedness for the tournament. Team Morocco ahead of the tournament that kicks off on January 9, 2022, arrived in the Central African nation on Tuesday, January 4, 2021. According to […]