Communications Officer of the National Democratic Congress, Sammy Gyamfi has described attempts by President Nana Addo Dankwa Akufo-Addo in addressing the immediate needs of frontline workers in the fight against coronavirus as mere lip service.

According to him, President Akufo-Addo and his team are to blame for the rather unfortunate cases of frontline workers testing positive for the deadly coronavirus.

The NDC communicator’s accusations come after three health workers tested positive for the novel coronavirus over the past few days.

He noted in a tweet that the government’s failure to provide the country’s health workers with essential Personal Protection Equipment (PPEs) has in the past days put them at great risk.

His tweet reads, “Government’s failure to provide our frontline health workers who are the first line of contact with COVID-19 victims with PPEs, has put them at great risk. Sad!”

Sammy Gyamfi earlier in a statement accused the Akufo-Addo government of being secretive with information about the progress of the fight against the spread of the virus which may be useful to the ordinary Ghanaian.

He stated in the statement that; “So far, government’s response to the pandemic has been one of Public Relations and Information Management. There are a lot of things the government is not telling us. We must brace ourselves for a possible extended lockdown and extremely hard times in the coming weeks. In critical times like this, we must celebrate works and not words. Promises are not achievements!” 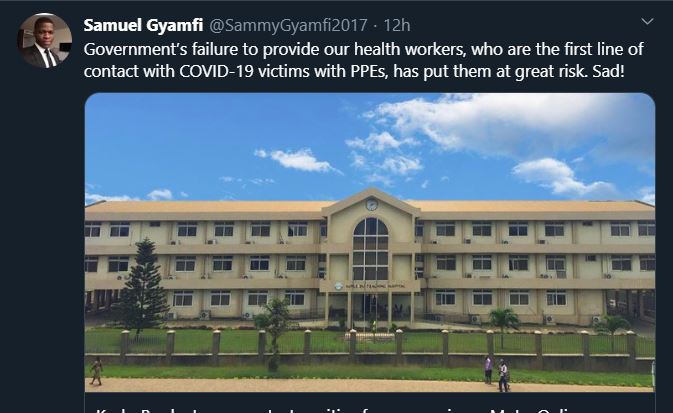 Tue Apr 7 , 2020
Cardinal George Pell has been freed from jail after Australia’s highest court overturned his convictions for child sexual abuse. The ex-Vatican treasurer, 78, was the most senior Catholic figure ever jailed for such crimes. In 2018, a jury found he abused two boys in Melbourne in the 1990s. But the Read More