Liverpool are still likely to be crowned Premier League champions, even if the coronavirus crisis causes the season to be abandoned. (Telegraph)

West Ham United’s vice-chairman Karren Brady says that the Premier League season has to be declared void if no more fixtures are possible. (Sun)

Leeds United manager Marcelo Bielsa has decided not to give his squad any extra time off during the coronavirus-enforced break. (Mail)

Many clubs’ scouting checks and due diligence for recruitment have been significantly hampered by travel bans, games being played behind closed doors and league suspensions. (Independent)

The Champions League could be completed with the quarter-finals and semi-finals being played over one leg. (Mirror)

Premier League clubs may refuse to play when the season is scheduled to resume in April because of concerns about their players’ fitness and the integrity of the competition. (Mail)

West Ham and Tottenham Hotspur are under pressure to complete their home games with several summer events already booked in at their stadiums. (Mirror)

A null and void season?

With elite football in Britain postponed for three weeks because of the coronavirus pandemic, what happens now?

Chelsea are keen on signing Manchester United’s English midfielder Angel Gomes, 19, on a free transfer at the end of the season. (Metro)

Manchester United are leading the race to sign Borussia Monchengladbach’s 23-year-old Switzerland midfielder Denis Zakaria, who is also being tracked by Liverpool, Atletico Madrid and Borussia Dortmund.(Sky Germany, via Mirror)

Barcelona have agreed to sign Argentine striker Lautaro Martinez from Inter Milan this summer and will give the 22-year-old a £16m-a-year contract. (Star)

Juventus will make a £25m offer for Chelsea’s Italy full-back Emerson Palmieri in the summer after having a bid for the 25-year-old rejected in January. (Express)

Burnley manager Sean Dyche says it is inevitable the Clarets will one day have to let English winger Dwight McNeil leave but claims they are under no pressure to sell the 20-year-old. (Mirror) 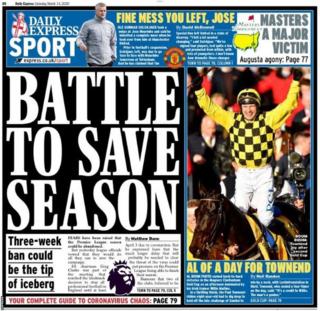