Skip to content
ENJOY ALL UR FAVORITE PROGRAMS ON ALL RADIO STATIONS IN GHANA AND GET THE TOTAL FELLING OF RADIO CLICK THE LINK TO DOWNLOAD
Read Time:2 Minute, 14 Second

Member of Parliament for Ningo-Prampram Sam George is of the view the Minister of National Security, Mr Albert Kan-Dapaah was set up by persons from within his own party with regard to his leaked amorous video call with an unknown lady.

“State craft on display. Set a man up, play coy, orchestrate calls for his resignation and pressure him to resign. Just so you bring the ‘greater evil’ of the two to control our national security. We live in dangerous times as a Nation,” the lawmaker posted on Facebook.

“Wicked, very wicked people run affairs of State. No one is safe from the cabal. Not even one of their own. Pray and stay woke. Always!” he added.

The leaked video shows Mr Kan-Dapaah modelling, in his pyjamas, in what appears to be a hotel room while he video-chatted a lady whose long-nailed fingers were the only things about her that could be seen.

In the amorous chit-chat, the national security chief appeared to have let down his guard and was totally under the control of the voice of his seductive interlocutor.

The lover is heard asking Mr Kan-Dapaah if he would miss her while he was on the plane.

“Are you going to miss me when you’re on the flight?” the lady asked the minister, to which he replied: “Of course!”

The lady, who would not show her face, then asked the minister what he was wearing and asked to see it.

“I want to see your pyjamas; I want to see the front, the back; like the way you did it yesterday”, she demanded of the minister, who then stood up and modelled in his pyjamas for his interlocutor.

“Turn around let me see it, is it trousers or shorts, raise your legs; nice, wow, what brand is that, it’s nice, you have good taste, yeah”, she said.

He then said: “I wish I can hug you like that day and it was so nice; it put me to sleep immediately”.

“The last time you did, didn’t it put me to sleep?” he asked the lady whose long nails and fingers with which she held the phone showed.

“It did, it put you to sleep”, the affirmed.

The minister then said: “I’m going to the bath now to have a bath with you; we’re going to bath together”.

The lady then refers to Mr Kan-Dapaah as “babes” and then he says: “I love you”. 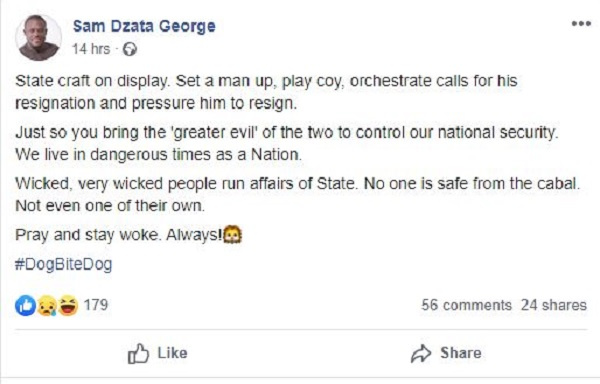 Even JHS boy could have detected; Kan Dapaah must go – Bonaa

Mon Jan 13 , 2020
Security expert Adam Bonaa has urged National Security Minister Kan Dapaah to resign from office following the leaked video with his girlfriend. According to him, the minister should have known better and exercised better judgment. “It’s very very disturbing. It could happen to anyone. But I believe that at certain Read More