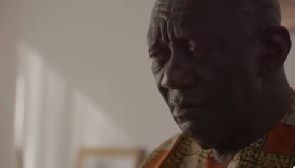 Former President John Agyekum Kufuor has described as “evil” the level of corruption and greed perpetrated in the administration of football in Ghana.

After watching excerpts of the documentary, Mr Kufuor who appears to be close to tears expressed disgust at the corrupt acts of some officials cited in the latest exposé by ace investigative journalist Anas Aremeyaw Anas.

In a video posted on Anas’ Facebook and Twitter page, Mr. Kufuor asked for the relevant punishment to be meted out to all the culprits, with the backing of the law.

“I want the nation to be shocked of this practice; of this evil. I believe Ghana is a country of laws and investigations should be put to work, and of course the outcomes be applied strictly to law.’’

“For many years we have been wondering why the quality of our game keeps going down…Ghana was one of the greatest teams on the continent and internationally.

The #Number 12 documentary will premiere at the Accra International Conference Center from June 6-7, 2018, with four screenings each day: 3pm, 5pm, 8pm & 10pm.

The video will also be shown at the new GCB Auditorium at the Kwame Nkrumah University of Science and Technology (KNUST) in Kumasi on June 9 and 10, 2018.

14 thoughts on “Anas exposé: Kufuor close to tears after watching excerpts of Number 12”

Wed Jun 6 , 2018
One Corner” hitmaker, Patapeezy has said that he has no problems with the Tamale-based singer, Fancy Gadam. Patapeezy stormed out of the Vodafone Ghana Music Awards after he was unable to win the Vodafone Song of The Year Award. He later alleged that Charter House had taken some monies from Read More