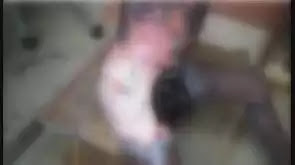 Daily Guide has gathered that a woman in her late 30s is in the grips of the police for allegedly pouring hot water on the groin of her own 11-year-old son, causing severe burns to his genital.
According to sources, the mother, whose name was given as Patience Botwey alias Maame Yaa, purportedly carried out the barbaric act after realizing that his son had taken her GH¢1.00.
The victim, Emmanuel Affenyi also known as Joe – a Class Two pupil of Funko Catholic Primary, in the Ahanta West District of the Western Region – is currently receiving treatment at the Kwesimintsim Hospital, near Takoradi.
He told reporters that on the day of the incident, he returned from school very hungry and took a one-cedi note in the room to buy food.

He indicated that when he was questioned by her mother, he confessed taking the money. Then the mother boiled some water and poured it on his groin.
After the act, the mother purportedly started applying some concoction on the burns for about three days, exacerbating the plight of the little boy.
According to sources, a Good Samaritan who was moved by the boy’s predicament sent him to the Kwesimintsim Hospital for attention on the evening of Sunday, May 6, 2018.
According to the Good Samaritan, the parents claimed they did not have any money on them to send the victim to the hospital.
DAILY GUIDE learnt that the nurses at the hospital who were bewildered by the degree of burns alerted the police who rushed to the facility to arrest the mother at the hospital.
The victim’s stepfather, who was among those who accompanied the victim to the hospital, is assisting the police in investigation.
DSP Olivia Ewubena Adiku, Western Regional police PRO, confirmed the story in an interview and indicated that it was the physician assistants at the hospital who alerted the police.
Facebook
Twitter
Pinterest
LinkedIn

Tue May 8 , 2018
Shatta Wale has poked fun at his eternal rival, Stonebwoy over his viral ‘Gringo‘ song, asking him to join him so they can boogie to it together.The Shatta Movement boss made this disclosure in the wake of Stonebwoy’s stance on blocking followers of Shatta Wale who ‘hashtag’ the Gringo song Read More